WASHINGTON - The insurance program for multiemployer pension plans, which covers more than 10 million Americans, is likely to run out of money by the end of 2025 according to the Pension Benefit Guaranty Corporation’s FY 2016 Projections Report.

Projections for PBGC's insurance program for single-employer pension plans, which covers about 28 million people, show that its financial condition is likely to continue to improve. The program is highly unlikely to run out of money in the next 10 years, and is likely to eliminate its deficit within the next three to seven years.

The Projections Report is PBGC's annual actuarial evaluation of its future operations and financial status. The report provides a range of estimates of the future status of insured pension plans and their effect on PBGC's financial condition, based on hundreds of different economic scenarios.

Absent changes in law or additional resources, this year's report projects that the Multiemployer Program's FY 2016 deficit of $59 billion will increase, with the average projected deficit (looking across multiple economic scenarios) rising to almost $80 billion (in nominal dollars) for FY 2026.

Under the Multiemployer Pension Reform Act of 2014, multiemployer plans that project insolvency within the next 20 years must notify participants that the plan is running out of money.

Over 1.2 million people are now in about 100 “critical and declining” plans. As these plans become insolvent, participants’ benefits will be reduced to the amounts guaranteed by the PBGC under current law. In a recent insolvency, this resulted in benefit cuts of more than half for over 40 percent of the plan’s participants.

The increasing demand for financial assistance from insolvent plans will accelerate the depletion of PBGC’s Multiemployer Program assets. The multiemployer insurance program is in serious trouble and is likely to run out of money by the end of fiscal 2025.  If that happens, the people who rely on PBGC guarantees will receive only a very small percent of current guarantees -- most participants would receive less than $2,000 a year and in many cases, much less. 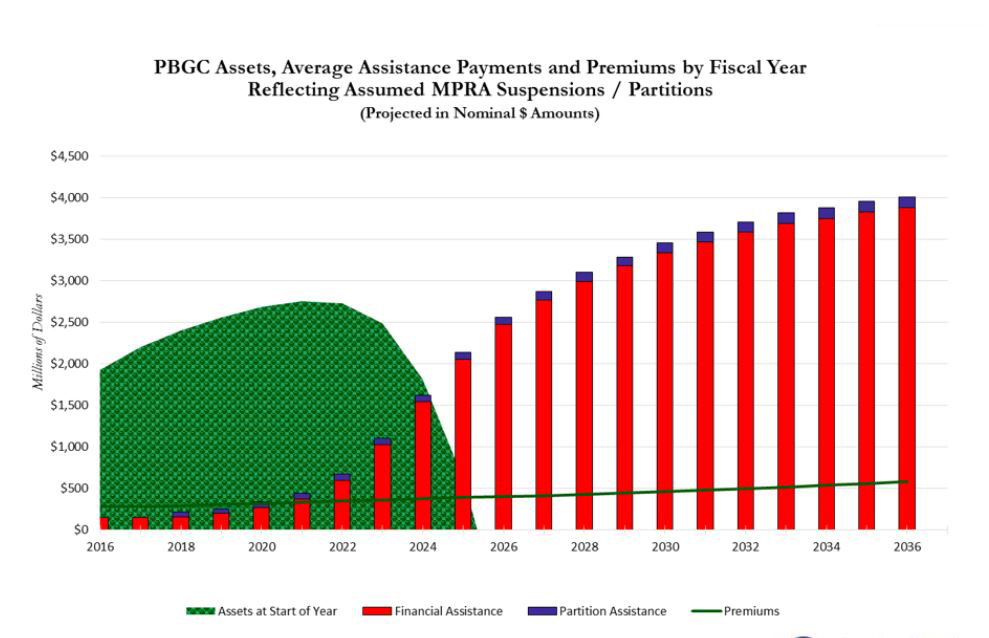 The timing of the Multiemployer Program’s insolvency is uncertain as it depends on when the most troubled plans run out of money. The date a specific plan is projected to run out of funds depends upon how the pension plan investments perform and on other decisions made by the plan’s trustees and participants. Most of the risk of the program running out of money falls during the years 2024 to 2026. It is more likely than not that the Multiemployer Program will deplete its assets by the end of fiscal 2025. The risk of program insolvency grows rapidly after 2025, exceeding 99 percent by 2036.

The President’s FY 2018 Budget contains a proposal to shore up the PBGC multiemployer fund.  The Budget proposes to create a new variable rate premium and an exit premium in the multiemployer program, estimated to raise an additional $16 billion in premium revenue over the ten-year budget window.

The financial condition of PBGC's insurance program for single-employer plans remains likely to improve over the next decade. Under current estimates, the program's actual FY 2016 deficit of $21 billion likely will turn to a surplus by the end of fiscal 2022.

This year’s report shows some acceleration in the improving trend noted in last year's report. But a wide range of outcomes remains possible, ranging from large deficits to surpluses.

PBGC and the Report

PBGC protects the pension benefits of nearly 40 million Americans in private-sector pension plans. The agency pays the benefits of about 1.5 million people in failed pension plans. PBGC receives no taxpayer dollars. Its operations are financed by insurance premiums, investment income, and, for the single-employer program, assets and recoveries from failed single-employer plans.

Each year PBGC issues its Projections Report, as required by the Employee Retirement Income Security Act. The report is PBGC's actuarial evaluation of its future operations and financial status. To make its projections, PBGC uses separate Pension Insurance Modeling Systems for single-employer and multiemployer plans. Each modeling system runs many simulations drawn from hundreds of economic scenarios to derive a range of possible future outcomes. No single projection, however, represents expected results under either program. For more information, visit PBGC.gov.