In 1875, the American Express Company established the first private pension plan in the United States, and, shortly thereafter, utilities, banking and manufacturing companies also began to provide pensions. Most of the early pension plans were defined benefit plans that paid workers a specific monthly benefit at retirement, funded entirely by employers.

Until 1974, there was little or no protection for pensions. One of the most shocking incidents of workers losing their retirement benefits occurred in 1963 when Studebaker terminated its employee pension plan, and more than 4,000 auto workers at its automobile plant in South Bend, Indiana, lost some or all of their promised pension plan benefits. 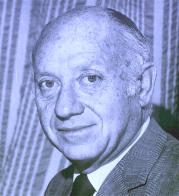 Workers everywhere were in jeopardy of losing their pensions when companies went out of business, and there was nowhere they could turn for help.

The late Senator Jacob Javits of New York (shown at the right) found this situation a threat to the private pension system and, in 1967, introduced pension reform legislation to protect the benefits of millions of workers covered by private pension plans.

On September 2, 1974, President Gerald R. Ford signed ERISA into law , which established the Pension Benefit Guaranty Corporation (PBGC). "Under this law," President Ford remarked, "the men and women of our labor force will have much more clearly defined rights to pension funds and greater assurances that retirement dollars will be there when they are needed."

PBGC began operation with a task force appointed by the Department of Labor. The group borrowed $100,000 from the Treasury (as provided in ERISA) and set up temporary offices in Silver Spring, MD. Early priorities included answering the mail and telephones, collecting enough premiums to provide operating capital, obtaining office furniture and equipment, creating and staffing a viable organization, and developing necessary regulations and basic forms (for example, the form needed to collect premium payments).

PBGC issued its first pension check for $140.75 on February 28, 1975, to a participant in the International City Bank of New Orleans Employees Retirement Plan. PBGC's work of protecting pensions and paying benefits for insured pension plans continues today. Currently, about 900,000 retirees in more than 4,600 failed plans receive their pensions through PBGC even though, for many of them, their companies may no longer be in business. An additional 620,000 workers will receive benefits when they retire.

Past PBGC Directors and Executive Directors