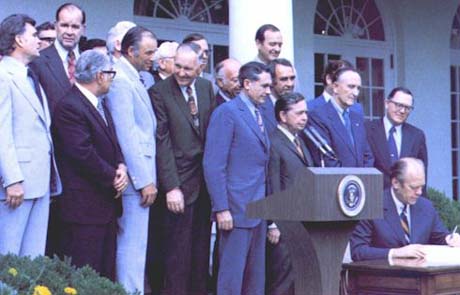 Dramatic growth in recent years has thrust private pension plans into a central role in determining how older Americans live in their retirement years.

From 1960 to 1970, private pension coverage increased from 21.2 million employees to approximately 30 million workers. During this same period, assets of these private plans increased from $52 billion to $138 billion. And they are now increasing at a rate of $12-15 billion a year. It will not be long before such assets become the largest source of capital in our economy.

Yet, this same growth in pension plans has brought with it a host of new problems. Many workers have ultimately lost their benefits - even after relatively long service - because when they left jobs, they thereby gave up rights to hard-earned pension benefits. Others have sustained hardships because their companies folded with insufficient funds in the pension plan to pay promised pensions. In addition, some pension funds have been invested primarily for the benefit of the companies or plan administrators, not for the workers. It is essential to bring some order and humanity into this welter of different and sometimes inequitable retirement plans within private industry.

Today, with great pleasure, I am signing into law a landmark measure that may finally give the American worker solid protection in his pension plan.

Under this law, which is entitled the Employee Retirement Income Security Act of 1974, the men and women of our labor force will have much more clearly defined rights to pension funds and greater assurances that retirement dollars will be there when they are needed. Employees will also be given greater tax incentives to provide for their own retirement if a company plan is unavailable.

It is certainly appropriate that this law be signed on Labor Day, since this Act makes a brighter future for almost all the men and women of our labor force.