WASHINGTON - The Pension Benefit Guaranty Corporation today issued two reports on the prospects of PBGC's insurance programs, the Projections Report and the MPRA Report. While the financial position of the agency's single-employer program is likely (but not certain) to improve, the agency's multiemployer program is likely to run out of funds by 2025. Substantial increases in premium revenue will be needed to avoid cuts in multiemployer insurance program guarantees.

In a letter transmitting the reports to Congress, PBGC's Board Chair, Secretary of Labor Tom Perez, wrote: "Insolvency of PBGC's multiemployer insurance program would devastate the retirement benefits of 1 million to 1.5 million participants and their families... We must address the funding and other challenges of the multiemployer insurance program before it is too late."

PBGC provides financial assistance to multiemployer plans when they run out of money so the plan can pay benefits up to the PBGC guarantee level and plan administrative expenses. Under the Multiemployer Pension Reform Act of 2014 (MPRA), PBGC may also provide limited assistance prior to insolvency if a number of conditions are met.

This year, premium revenue in the multiemployer program is projected to be less than $300 million, even after fully reflecting the increase enacted as part of MPRA. For PBGC to meet its average projected financial assistance obligations through 2035, the MPRA Report projects that premiums will need to increase to over four and one half times the premiums that are expected under current law.

The report shows the importance of carefully designing those increases to avoid exacerbating the amount of premiums needed. A well designed increase may encourage additional contributions and continued participation in plans and strengthen the multiemployer system. A poorly designed increase may accelerate plan insolvency. This would hurt participants and lead to even larger premiums. The President's 2017 Budget proposed a structure for increased premiums under the multiemployer program at a level that would eliminate most of the risk of the multiemployer program becoming insolvent within 20 years.

The MPRA Report is a one-time publication required under the Multiemployer Pension Reform Act of 2014.  Its purpose is to notify Congress whether current premium revenue is sufficient to meet PBGC's future financial assistance obligations to multiemployer plans for 10 and 20-year periods beginning in 2015; and, if insufficient, the additional premiums that will meet, but not exceed, the agency's obligations. 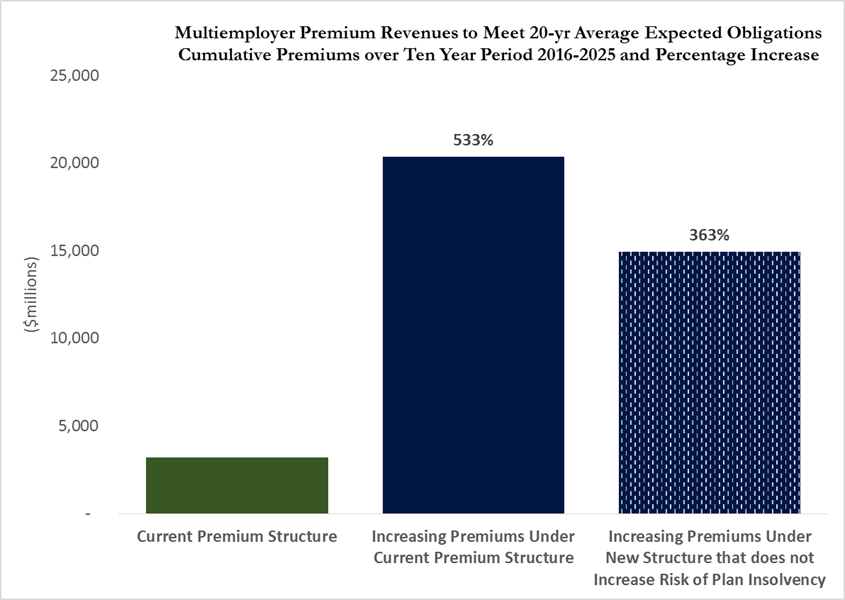 PBGC's FY 2015 Projections Report examines the 10-year projection of the multiemployer program using different simulations of the economy and alternate scenarios for the number of plans approaching insolvency that will apply to cut benefits or request early PBGC assistance. Under each scenario, the results show that the program is likely to run out of money by the end of 2025, and that there is considerable risk that it could run out before that date.

PBGC's multiemployer deficit is also projected to remain high - on average, across all simulations, the report shows a projected deficit of $53.4 billion in today's dollars by 2025.

Projections for the agency's single-employer program show somewhat better prospects for the program but are generally consistent with findings in last year's Projections Report. The program's financial position remains likely (but not certain) to improve, with the potential to eliminate the deficit in the next decade.

Each year PBGC issues its Projections Report, as required by the Employee Retirement Income Security Act. The report is PBGC's actuarial evaluation of its future operations and financial status.  To make its projections, PBGC uses separate Pension Insurance Modeling Systems for single-employer and multiemployer plans. Each modeling system runs many simulations drawn from hundreds of economic scenarios to derive a range of possible future outcomes. No single projection, however, represents expected results under either program.

PBGC protects the pension benefits of more than 40 million Americans in private-sector pension plans. The agency is directly responsible for paying the benefits of about 1.5 million people in failed pension plans. PBGC receives no taxpayer dollars. Its operations are financed by insurance premiums, investment income, and assets and recoveries from failed single-employer plans. For more information, visit PBGC.gov.