WASHINGTON - A Pension Benefit Guaranty Corporation study finds that more than half of the people in terminated multiemployer plans that run out of money in the near future face a reduction in benefits under current PBGC guarantees. This compares to 20 percent of workers and retirees who saw reduced benefits under plans that have already run out of money and are relying on PBGC financial assistance.

The study, PBGC's Multiemployer Guarantee, also looks at the depth of benefit reductions.  For retirees and workers whose benefits were not fully guaranteed in the past, a typical loss was about 10 percent of the promised pension benefit. These reductions are likely to become deeper and more frequent for retirees and workers in plans that require PBGC assistance in the future. 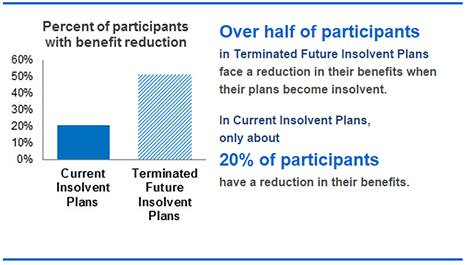 PBGC has two different guarantee programs, one for single-employer plans and one for multiemployer plans; the provisions of each program are set by law.  The most recent study of the single-employer guarantee program found that sixteen percent of retirees and workers in a sample of terminated plans faced benefit reductions when their plans terminated.

This report was largely compiled before the enactment of The Multiemployer Pension Reform Act of 2014 (MPRA) legislation, which provides certain troubled multiemployer plans with additional tools to change benefits while keeping benefits above the PBGC guarantee amount, if doing so would maintain plan solvency.  MPRA is expected to help some plans avoid running out of money.  But, except with respect to pre-retirement survivor benefits, the legislation did not change the PBGC guarantee; thus the findings of this report are not affected.

The study examined the impact that guarantee limits have on workers and retirees in plans that receive or will receive financial assistance from PBGC. The agency reviewed guaranteed benefit payments of more than half of the nearly 152,000 workers and retirees in currently insolvent plans and terminated plans that are expected to need financial assistance in the future, including about eighty percent of retirees and workers in plans currently receiving assistance. PBGC also analyzed data for about 25 percent of retirees and workers in plans that have already terminated and are expected to require assistance in the future.

PBGC protects the pension benefits of more than 41 million Americans in private‐sector pension plans. The agency is responsible for more than 1.5 million people in failed pension plans. PBGC receives no taxpayer dollars and never has. Its operations are financed by insurance premiums, investment income, and with assets and recoveries from failed plans. For more information, visit PBGC.gov.