Throughout this, PBGC continues to help.  Thirty-seven years ago Congress set us up to protect and insure pension plans, make sure workers’ benefits get paid, and promote the voluntary pension system.  That remains our mission:

We work for more secure retirements.  We implement pension laws, and work with the President and Congress to improve them for the next generation.   This past year, the Administration proposed that PBGC’s premiums be reformed to encourage the preservation of healthy plans, which will strengthen both existing plans and our ability to protect them.

We work with companies to preserve their pension plans.  Last year PBGC staff negotiated with dozens of companies, both in bankruptcy and otherwise, to preserve their plans.  Partly as a result, 74,000 people will keep their pension plans that otherwise might not.  PBGC also made changes to reduce the procedural and regulatory burdens that accompany traditional plans.

When plans do fail, we step in and make sure benefits keep getting paid.  We work to ensure that retirees get the full benefits provided by law — on time.

We currently protect the retirement hopes of nearly 44 million participants in more than 27,000 ongoing pension plans.  When a PBGC-insured plan cannot keep its pension promises, PBGC makes sure the plan’s participants get their benefits, up to the limits of federal pension law.

Over the years we’ve become responsible for about 1.5 million people in more than 4,300 failed plans.  Every month, on average, we pay $458 million for 873,000 retirees.  PBGC is also responsible for future payments to about 628,000 who have not yet retired.  During FY 2011, we assumed responsibility for more than 57,000 additional workers and retirees in 134 failed plans.

But that has never been, and is not now, the whole of our mission. From the beginning, PBGC has been charged to “encourage the continuation and maintenance of voluntary private pension plans for the benefit of their participants.”

One doesn’t need to be an expert to see that such plans, and retirement security generally, are in trouble.

Longer Healthier Lives Require Better Pensions & More Saving, not Less. The great news is that people in America are living longer and healthier lives. Today, at retirement, the average person retiring can expect to live for almost two decades.  That’s just the average; many will live into their late 80s or 90s.  This is a big improvement: fifty years ago, after retirement, the average person lived less than 15 years.

Unfortunately, pensions haven’t kept up.  Many companies no longer rely on traditional pension plans and focus instead on 401(k)-type defined contribution savings plans.  Those DC plans may force individual employees to become their own retirement and investment experts; as a result, many save too little, invest it in ways that generate a lower return, and often use the savings for things other than retirement.

Once we do the math, it’s clear that retirement is going to cost more, not less.  As people live longer, pensions are becoming more expensive and people are going to have to save more.

One of this country’s greatest accomplishments has been to provide security to our seniors.  Seventy-five years ago, the people who were most likely to be poor were the elderly who could no longer work.  Today, thanks to Social Security and Medicare, economic growth – and pensions – that is no longer true.  But we are in danger of reversing that progress.  And people know it.

Retirement Concerns are Growing.   Most people don’t think they have enough to retire, and since the stock market crash of 2008, these concerns have skyrocketed.  According to the National Institute on Retirement Security, in 2009, a staggering 83 percent reported having retirement concerns.  The Employee Benefits Research Institute noted in their last Retirement Confidence Survey that a record percentage of workers is “not at all confident” about retirement. 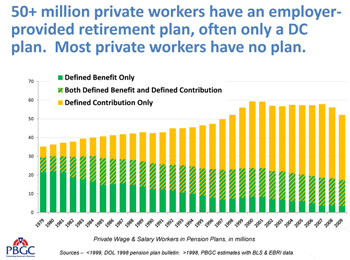 Unfortunately, many employers are abandoning them.  Some employers have frozen their plans; others have gone further and eliminated them entirely, via voluntary standard terminations.

There continue to be options that preserve some of the benefits of DB plans. Hybrid DB plans, such as cash balance plans, cover more than 1/3 of all participants in private-sector plans, and give more portable options.

PBGC is working to help ensure that employers and employees continue to have access to options for a more secure retirement.

Working to Preserve the Pension Plans We Have

Before any plan fails, PBGC tries to preserve the plan and keep responsibility for delivering on pension promises in the hands of the employer who made them. Every plan retained by its sponsor is a victory both for PBGC and for the plan’s participants. Through our Early Warning Program, we identify transactions that might threaten the health of pension plans, and step in before plans fail.

When major layoffs or plant closures threaten a plan’s viability, PBGC steps in and works to negotiate protection for the plan.

Even after a company enters bankruptcy, PBGC is an active advocate, urging companies to keep their plans if possible through their reorganization.

Stepping in to Ensure Pensions if Plans Fail

If a plan cannot be preserved, then PBGC will pay its beneficiaries.  For 37 years we have stepped in to pay their benefits — on time, each and every month, and without interruption.  In FY 2011, this proud tradition continued: we made 8.5 million payments totaling nearly $5.5 billion.

More than 10 million of America’s workers and retirees participate in and rely on multiemployer plans.  For decades, multiemployer plans were in relatively good health, even in the face of industry decline.  Unfortunately, for many multiemployer plans, that is no longer true. Many are substantially underfunded; for some, the traditional remedies of increasing funding or reducing future benefit accruals won’t be enough.

PBGC’s multiemployer pension insurance works very differently from our single-employer program.  PBGC has fewer tools to work with multiemployer plans, and we cannot step in until plans are already insolvent, by which time other remedies are no longer possible.

In the past year, as a result of additional failures, the financial deficit of our multiemployer program increased sharply, from $1.4 billion last year to $2.8 billion as of September 30, 2011.  The greater challenge, however, comes from those plans that have not yet failed:  our estimate of our reasonably possible obligations (obligations to participants), described in our financial statements, increased to $23 billion.

We have been studying the challenges facing multiemployer plans and listening to stakeholders about possible approaches to address them.

With these additional obligations, PBGC’s total obligations rose to nearly $107 billion.  Although our investment assets increased as well, overall our net deficit rose from $23 billion at the end of FY 2010 to $26 billion this fiscal year.

Since our obligations are paid out over decades, we have sufficient funds to pay benefits for the foreseeable future.

Nonetheless, PBGC’s obligations are clearly greater than its resources.  We cannot ignore PBGC’s future financial condition any more than we would that of the pension plans we insure.

To meet these challenges in a way that both preserves pensions and PBGC’s ability to insure them, the Administration proposed to give the PBGC Board authority more consistent with other Federal insurance programs to set PBGC’s premiums.  Premiums would be fairer, and take into account risks that different plan sponsors pose to their retirees and to PBGC. This would replace the current system, which forces sound companies to pay for others that are not and charges the highest premiums when plans can least afford them. Without such action, the PBGC’s deficit will increase and we may face, for the first time, the need for taxpayer funds.

Investing the funds entrusted to us wisely.  In FY 2011, roughly half of PBGC professional investment managers outperformed their respective portfolio benchmarks. For the year, PBGC realized a 5.1% annualized return on total invested funds (excluding transition accounts), which is consistent with our overall benchmark.

Staying Accountable to Pensioners and the Public

Throughout our 37 years, PBGC has worked to provide our assistance in ways that are not only compassionate, but also professional and accountable.  In that tradition of accountability, this report offers a complete accounting of our operating and financial performance.

PBGC is proud of the professionalism of our people and of the quality of the services we provide.  PBGC enters people’s lives at a time of great distress, and we work hard to provide both security and compassion.  Nonetheless, we are far from perfect and there is always room for improvement. Each year, we measure and report on our performance.  Our annual performance report can be found beginning on page 2.  It covers the benchmarks we use to satisfy ourselves and the public that we are: 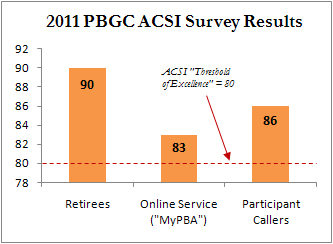 Meeting the needs both of pensioners & pension plans.  In FY 2011, our customer satisfaction scores, measured by independent American Customer Satisfaction Index surveys, remained well above most federal agencies and private businesses. Several exceeded the ACSI “threshold of excellence” of 80. Retirees who count on us for their benefits rated us at an all-time high of 90.

Paying benefits as accurately and quickly as possible.  In FY 2011, the average time to issue a benefit determination dropped from 3.8 years to 2.9 years.

Finding & Correcting Errors. Our Inspector General found that, in several plans that were terminated five to eight years ago, PBGC did a poor job of accounting for all the assets; as a result, some pensioners may not have received the right benefit.  We are redoing that work and are committed to correcting any errors.  We are also making changes to prevent similar mistakes in the future.

During FY 2011, we paid $5.5 billion so that retirees and their surviving beneficiaries would receive benefits, because their pension plans could not.

On our financial statements we disclose the pension obligations we have assumed to date.  Our obligations (“liabilities”) continue to exceed the assets currently available to pay them, so we continue to report a very substantial deficit.  As of September 30, 2011, we had single-employer assets totaling $79 billion, an increase of about $1.5 billion from the close of the previous fiscal year.  Our single-employer liabilities (measured in present value though they will be paid over decades) totaled $93 billion; this compares to total liabilities of $90 billion in 2010.  The net of these positions is a single-employer deficit of $23 billion, an increase of $1.7 billion from the prior year.  The multiemployer insurance program experienced a $1.3 billion decline, bringing its FY 2011 deficit to $2.8 billion, with $1.7 billion in assets to cover about $4.5 billion in liabilities.

More details of PBGC’s financial condition can be found in our financial statements and related materials.  The independent auditor’s reports are also included.

We are pleased that, in FY 2011, PBGC continued its unbroken 19-year record of unqualified (clean) audits.  Our independent auditor and Inspector General continue, appropriately, to raise issues about the security of our information and the integration of our financial systems.  We have undertaken a multi-year program to remedy these weaknesses.

An Ongoing Commitment to Help

PBGC has a long proud history of helping people in troubled times, giving them an important source of security.  Our challenge is to continue to do so, professionally and accountably — to take advantage of time and technology to help millions of America’s workers and retirees achieve a more secure future, however uncertain that future may appear.