A Message From Our Director

In the pages that follow, you'll read about some very good work by an outstanding agency.

In FY 2012, we continued as one of the best benefits agencies in government, stepping in to take responsibility for 47,000 people's pensions when their plans failed, including 17,000 who are already retired. Not one of them missed a payment.

The American Airlines bankruptcy reminded people that we first try to preserve pensions, not just pay for them if they fail. Our efforts on behalf of 130,000 people in American's four plans helped them keep the benefits they'd been promised.

Also in FY 2012, we began a transition to a new generation of PBGC management. They are experienced and talented, and share our commitment to PBGC's missions. Some came from outside the agency; others rose through the ranks. All are energized and have begun to take a fresh look at the agency's work.

We made changes to the way we do some of our most crucial work, in some cases to better meet today's challenges and in others to ensure that we don't repeat past errors. In FY 2012, we completed rework on plans of two companies where our Inspector General had questioned the original benefit determinations. Although the benefit adjustments we made were very slight, errors of any size affect the public's trust. We are correcting them and making changes to ensure that they do not happen again.

One of PBGC's primary missions under the Employee Retirement Income Security Act (ERISA) is to "encourage the continuation and maintenance of voluntary private pension plans. "It's an obligation we take seriously. The trends are ominous:

What Can Government Do?

Our workplace retirement system is not provided by government — it's the shared responsibility of companies and individuals. But government can help — and at PBGC we're doing our part.

DB plans still cover over 35 million active workers in private and public sectors. Tens of thousands of companies continue to offer DB pensions.  Many would like to continue to do so, and we're trying to help.

At the President's direction, we've made changes to reform or reduce unnecessary regulatory requirements — and we're planning even more.  For sound companies and plans, we're trying to reduce burdens (and premiums) and focus on companies and plans where there's risk. For example, ERISA sometimes requires companies to provide financial assurances for their pensions when they downsize.  Business said the way we enforced the law burdened companies that posed little actual risk — and we agreed.  Now we're focusing enforcement on the minority of cases where there really is a threat.

One size does not fit all. Each company's situation is different. Some companies are willing to keep DB plans if they can share risks and costs with their employees; hybrid DB/DC approaches could help. Others would offer lifetime options if they didn't also come with permanent obligations.

In FY 2012, we published a proposed rule helping to clarify rules governing cash balance plans, which would help employers to choose them with confidence. We're working with the other ERISA agencies on these and other ways to increase flexibility and expand options for employers and employees.

As more Americans age and live longer, healthier lives, both private and public retirement programs will necessarily cost more in the future. We must recognize this, and determine the steps that will be necessary to pay for them.  That doesn't mean that employers will write blank checks to pay for everything. They won't. People will have to save more, too, both inside and outside their 401(k)s.

PBGC's Own Finances Must be Sound, Too

PBGC is funded through insurance premiums paid by plan sponsors, assets from failed plans, investment earnings on our assets, and recoveries in bankruptcy. We don't receive any taxpayer dollars.  But that means that our own finances need to be in order.  In 2003, the Government Accountability Office added PBGC to its "High Risk" list of agencies, because we control neither the benefits we pay nor the premiums we charge.  Congress has repeatedly raised PBGC's premiums, but they remain too low to fund our obligations.  That's why, nine years later, we remain on GAO's High Risk List.

Administrations of both parties have proposed changing this, by making PBGC's Board responsible for setting premiums. This administration has gone further and proposed both public processes and safeguards to ensure that reformed premiums would not inadvertently discourage the very pension plans on which PBGC depends. Unlike previous premium increases, 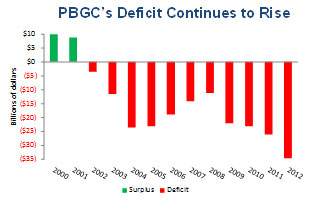 which forced the majority of companies to pay for the risky behavior of the minority, premiums would take into account the financial health of the employer and the circumstances of the individual plan. And, unlike the current variable rate premium, premiums would be designed not to rise just when the economy or markets are weak and companies can least afford to pay them.

PBGC has enough funds to meet its obligations for years.  But without the tools to set its financial house in order and to encourage responsible companies to keep their plans, PBGC may face for the first time the need for taxpayer funds. That's a situation no one wants.

In 1974, Congress enacted and the President signed ERISA, landmark legislation designed to preserve and enhance retirement security. Over the four decades since, much has changed.  What has not changed, however, is the nation's desire for a secure retirement.

Providing secure retirements remains a national goal. Achieving it will require the collaboration and cooperation of many, both inside and outside of government — employers, employees, pensioners, and their representatives, working with the ERISA agencies and members of Congress in both houses and on both sides of the aisle. The people of PBGC stand ready to help, and look forward to doing so — to find new ways to enhance the security of millions of retirees, and of the millions more who will retire in the future.